This page describes how virtio-blk latency can be measured. The aim is to build a picture of the latency at different layers of the virtualization stack for virtio-blk.

Single-threaded read or write benchmarks are suitable for measuring virtio-blk latency. The guest should have 1 vcpu only, which simplifies the setup and analysis.

The benchmark I use is a simple C program that performs sequential 4k reads on an O_DIRECT file descriptor, bypassing the page cache. The aim is to observe the raw per-request latency when accessing the disk.

Trace events in QEMU can instrument components inside QEMU. This includes virtio hardware emulation and AIO. Trace events are not upstream as of writing but can be built from git branches:

This particular commit message explains how to use the simple trace backend for latency tracing.

The single-threaded read/write benchmark prints the mean time per operation at the end. This number is the total latency including guest, host, and QEMU. All latency numbers from layers further down the stack should be smaller than the guest number.

Ftrace can instrument virtio-pci inside the guest:

Note that putting the trace file in a tmpfs filesystem avoids causing disk I/O in order to store the trace.

The kvm latency is the time from the virtqueue notify pio exit until the interrupt is set inside the guest. This number does not include vmexit/entry time.

Events tracing can instrument kvm latency on the host:

Note how kvm_pio and kvm_set_irq can be filtered to only trace events for the relevant virtio-blk device. Use lspci -vv -nn and cat /proc/interrupts inside the guest to find the pio address and interrupt.

The virtio latency inside QEMU is the time from virtqueue notify until the interrupt is raised. This accounts for time spent in QEMU servicing I/O.

The paio latency is the time spent performing pread()/pwrite() syscalls. This should be similar to latency seen when running the benchmark on the host.

The host is 2x4-cores, 8 GB RAM, with 12 LVM striped FC LUNs. Read and write caches are enabled on the disks.

The qemu-kvm is 0.12.4 with patches as necessary for instrumentation.

The guest is a 1 vcpu, x2apic, 4 GB RAM virtual machine running a 2.6.32-based distro kernel. The root disk image is raw and the benchmark storage is an LVM volume passed through as a virtio disk with cache=none.

The following diagram compares the benchmark when run on the host against run inside the guest:

The following diagram shows the time spent in the different layers of the virtualization stack:

Here is the raw data used to plot the diagram:

The Guest benchmark control (ns) column is the latency reported by the guest benchmark for that run. It is useful for checking that overall latency has remained relatively similar across benchmarking runs.

The following numbers for the layers of the stack are derived from the previous numbers by subtracting successive latency readings:

The Delta (ns) column is the time between two layers, e.g. Guest benchmark and Guest virtio-pci. The delta time tells us how long is being spent in a layer of the virtualization stack.

The sequential read case is optimized by the presence of a disk read cache. I think this is why the latency numbers are in the microsecond range, not the usual millisecond seek time expected from disks. However, read caching is not an issue for measuring the latency overhead imposed by virtualization since the cache is active for both host and guest measurements.

The results give a 33% virtualization overhead. I expected the overhead to be higher, around 50%, which is what single-process dd bs=8k iflag=direct benchmarks show for sequential read throughput. The results I collected only measure 4k sequential reads, perhaps the picture may vary with writes or different block sizes.

The Guest 202095 ns latency (13% of total) is high. The guest should be filling in virtio-blk read commands and talking to the virtio-blk PCI device, there isn't much interesting work going on inside the guest.

The seqread benchmark inside the guest is doing sequential read() syscalls in a loop. A timestamp is taken before the loop and after all requests have finished; the mean latency is calculated by dividing this total time by the number of read() calls.

The Guest virtio-pci tracepoints provide timestamps when the guest performs the virtqueue notify via a pio write and when the interrupt handler is executed to service the response from the host.

The QEMU 29393 ns latency (~15% of total) is high. The QEMU layer accounts for the time between virtqueue notify until issuing the pread64() syscall and return of the syscall until raising an interrupt to notify the guest. QEMU is building AIO requests for each virtio-blk read command and transforming the results back again before raising an interrupt.

The time spent in QEMU servicing a read request made up 29 us or a 23% overhead compared to a host read request. This deserves closer study so that the overhead can be reduced.

The benchmark QEMU binary was updated to qemu-kvm.git upstream [Tue Jun 29 13:59:10 2010 +0100] in order to take advantage of the latest optimizations that have gone into qemu-kvm.git, including the virtio-blk memset elimination patch.

Latency numbers can be calculated by recording timestamps along the I/O code path. The trace events work, which adds static trace points to QEMU, is a good mechanism for this sort of instrumentation.

The following trace events were added to QEMU:

The following results compare latency of the two AIO mechanisms. All time measurements in microseconds.

The seqread benchmark reports aio=threads 200.309 us and aio=native 193.374 us latency. The Linux AIO mechanism has lower latency than POSIX AIO emulation; here is the detailed latency trace to support this observation:

The time between request submission and completion is lower with Linux AIO. paio_submit -> posix_aio_read takes 143.724 us while laio_submit -> qemu_laio_completion_cb takes only 136.241 us.

Note that the 8 us latency from virtio_queue_notify to submit is because the QEMU binary used to gather these results does not have the virtio-blk memset elimination patch.

Trace events inside QEMU have a hard time showing the latency breakdown between userspace and system calls. Because trace events are inside QEMU and the iothread mutex must be held, it is not possible to measure the exact boundaries of blocking system calls like select(2) and ioctl(KVM_RUN).

The ftrace raw_syscalls events can be used like strace to gather system call entry/exit times for threads.

The following diagram shows the userspace/system call times for the iothread and vcpu threads: 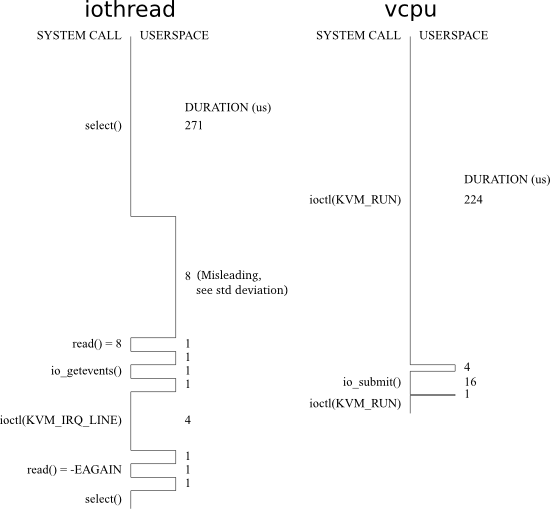 The iothread latency statistics are as follows:

The vcpu thread latency statistics are as follows:

The *_post statistics show the time spent inside QEMU userspace after a system call.

Observations on this data:

The following data shows the code path executed in QEMU when the seqread benchmark runs inside the guest: