This page describes how virtio-blk latency can be measured. The aim is to build a picture of the latency at different layers of the virtualization stack for virtio-blk.

Single-threaded read or write benchmarks are suitable for measuring virtio-blk latency. The guest should have 1 vcpu only, which simplifies the setup and analysis.

Trace events in QEMU can instrument components inside QEMU. This includes virtio hardware emulation and AIO. Trace events are not upstream as of writing but can be built from git branches.

The single-threaded read/write benchmark prints the mean time per operation at the end. This number is the total latency including guest, host, and QEMU. All latency numbers from layers further down the stack should be smaller than the guest number.

Ftrace can instrument virtio-pci inside the guest:

Note that putting the trace file in a tmpfs filesystem avoids causing disk I/O in order to store the trace.

The kvm latency is the time from the virtqueue notify pio exit until the interrupt is set inside the guest. This number does not include vmexit/entry time.

Events tracing can instrument kvm latency on the host:

Note how kvm_pio and kvm_set_irq can be filtered to only trace events for the relevant virtio-blk device. Use lspci -vv -nn and cat /proc/interrupts inside the guest to find the pio address and interrupt.

The virtio latency inside QEMU is the time from virtqueue notify until the interrupt is raised. This accounts for time spent in QEMU servicing I/O.

The paio latency is the time spent performing pread()/pwrite() syscalls. This should be similar to latency seen when running the benchmark on the host.

The host is 2x4-cores, 8 GB RAM, with 12 LVM striped FC LUNs. Read and write caches are enabled on the disks.

The qemu-kvm is 0.12.4 with patches as necessary for instrumentation.

The guest is a 1 vcpu, x2apic, 4 GB RAM virtual machine running a 2.6.32-based distro kernel. The root disk image is raw and the benchmark storage is an LVM volume passed through as a virtio disk with cache=none.

The following diagram shows the time spent in the different layers of the virtualization stack: 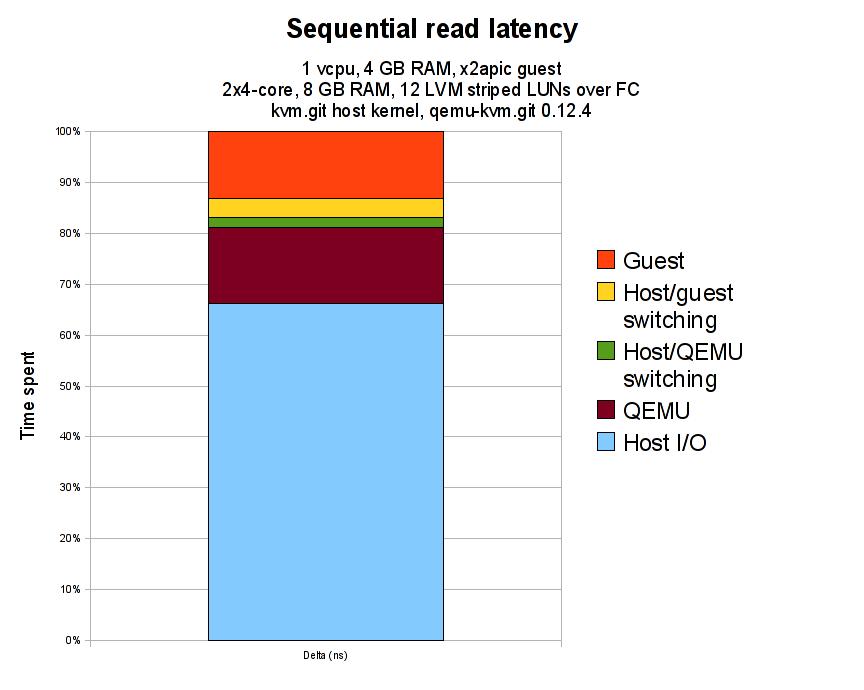 Here is the raw data used to plot the diagram:

The Delta (ns) column is the time between two layers, e.g. Guest benchmark and Guest virtio-pci. The delta time tells us how long is being spent in a layer of the virtualization stack.

The Guest benchmark control (ns) column is the latency reported by the guest benchmark for that run. It is useful for checking that overall latency has remained relatively similar across benchmarking runs.